The tragic demise of Telltale Games really is quite a bitter pill to swallow when you take a step back to fully consider the brilliance of its multi-award winning back catalogue of choice-based adventure games. From The Wolf Among Us to Batman: The Enemy Within, The Walking Dead to Guardians of the Galaxy, this was a studio that singlehandedly brought about a resurgence in the popularity of the genre in which it so excelled and, of all the many top-notch titles it released up until its closure in 2018, Tales from the Borderlands is absolutely in with a shout as perhaps the best of the whole darn bunch.

Having been removed from most digital storefronts all the way back in 2019 as a result of the studio’s closure, Tales from the Borderlands was relaunched on PlayStation, Xbox and PC in February of this year; now it finally makes its way to Switch in a port that sees all five episodes of this excellent space adventure released in a single essential package. If you’ve yet to experience this one, believe us, you’re in for a treat.

If there’s one aspect of the full-fat Borderlands FPS experience that we’ve really never seen eye to eye with, it’s 100% the irritatingly loud, brain-rattlingly puerile attempts at humour that hammer you over the head during every waking moment you spend exploring its uniquely-styled wastelands. Yes, these games still more than manage to succeed thanks to some top-notch shooting and looting action but, in terms of comedy — in terms of narrative and the characters that populate the badlands of Pandora and beyond (Claptrap, we absolutely loathe you) — we’ve never been particularly, or really even remotely, impressed. 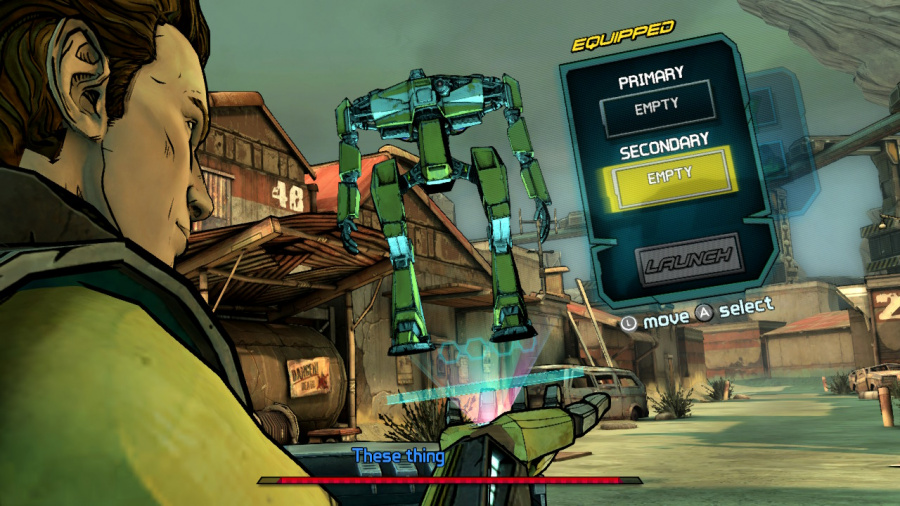 With this in mind, you would think that a purely narrative-focused adventure spin-off set within this self-same universe would be something we’d most likely not enjoy but, with Telltale Games at the helm, this is a world transformed. From the opening moments of episode one to the grand finale of five, Tales from the Borderlands absolutely excels at creating a take on this universe that’s chock full of entertaining action and populated by well-written characters you’ll actually grow to care about. It consistently delivers actual belly laughs over its ten-hour running time, manages to convincingly portray its core protagonists’ emotional journeys, does a strong line in romantic subplot and, what’s more, it does all of this whilst giving fans of its source material plenty of returning characters, lore and a healthy dollop of the series’ signature gross-out humour to indulge in.

Without wanting to ruin anything of the story for those who have yet to experience it, Tales from the Borderlands sees cocky Hyperion business boy Rhys (Troy Baker) and street-smart con-artist Fiona (Laura Bailey) thrust together alongside a rough and tumble crew in a race to nab a vault key that will unlock the vast riches of the fabled Vault of the Traveller, a treasure trove that, quite frustratingly, has a tendency to constantly teleport itself to random locations across the known universe. What begins as a relatively straightforward revenge story that’s complicated somewhat by a spot of double-crossing soon explodes into a madcap comedy adventure that sees the pair face off against a seemingly endless parade of suitably grotesque enemies, deranged psycho killers, double-crossing family members and much more besides. 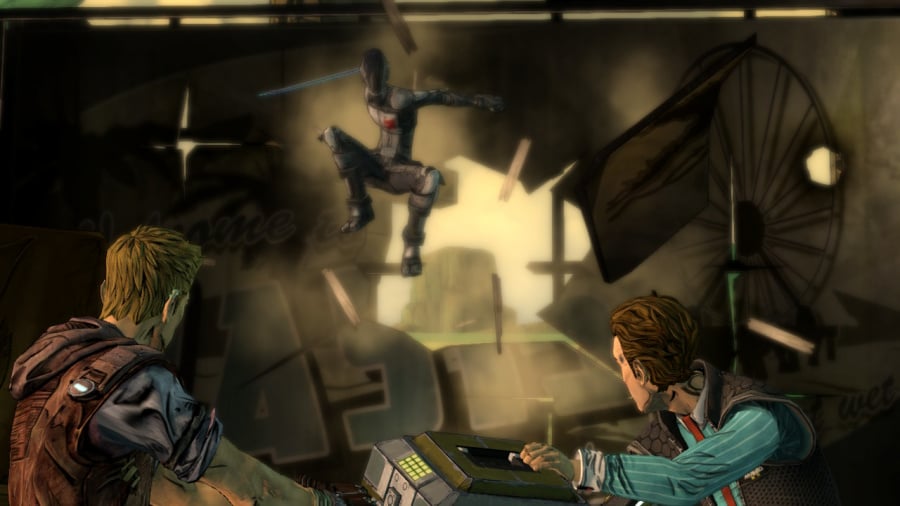 Over the course of the five two-hour episodes that make up the campaign here, our heroes retell the tale of their adventures to a mysterious captor, a playful narrative element that sees them occasionally embellish the truth of their exploits for dramatic effect. They take part in spectacular death rallies, explore labyrinthian techno vaults that rise from the dust of long-abandoned shanty towns and get involved in plenty of action-packed — and often quite hilariously violent — sequences in which they do battle with Rhys’ Hyperion rival, Vasquez, ruthless crime lord Vallory and a host of other ne’er do-wells along the way.

Of course, as with any Telltale game, you’ll be given plenty of opportunity to interact as things play out here, and besides the expected moral choices and decisions that alter the ebb and flow of how the story twists and turns, you’ll also get to play your part in action sequences, lining up targets for shots from Fiona’s hidden elemental wrist pistol, scanning environments or hacking into hardware with Rhys’ cybernetic eyeball, dodging incoming damage or leaping from harm’s way with quick flicks of your thumbsticks and so on.

This stuff doesn’t always entirely come off. Some exploration sequences where you’re given limited control over where Rhys or Fiona wander can suffer from a frustratingly positioned camera. Missed QTEs often don’t seem to matter much, and there’s the occasional event that suddenly turns up the difficulty, resulting in a few frustrating deaths. Overall, however, these interactive bits and bobs do a great job in keeping you hooked even more into a game that we’d quite happily just sit and watch unfold. 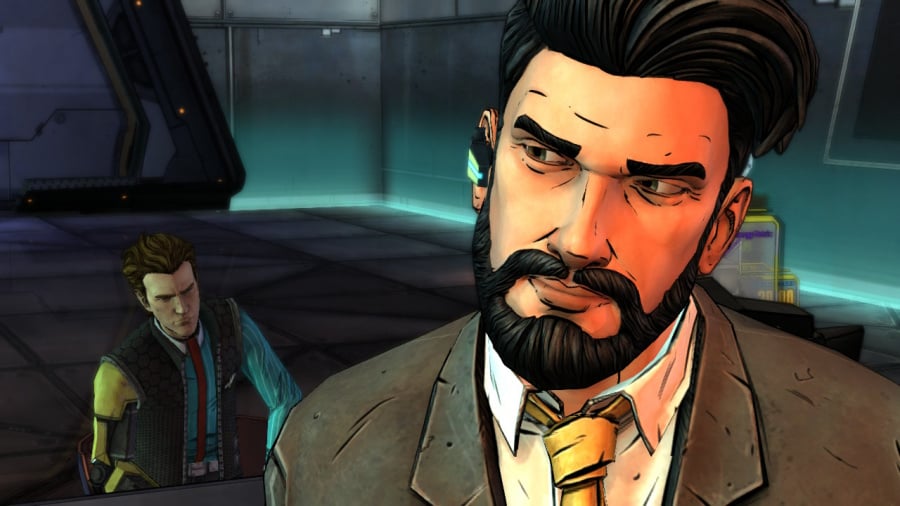 There’s a constant stream of cracking characters getting into all sorts of bother and twisted situations to enjoy here, each and every one of whom are brought wonderfully to life by some of the most talented voice-artists in the business. Troy Baker and Laura Bailey excel — as they always do — in the lead roles of Rhys and Fiona, Patrick Warburton turns Vasquez into a delightfully hammy slimeball of a villain and an AI reconstruction of Handsome Jack is brought screaming back to life by the excellent Dameon Clarke. The way in which Telltale Games managed to set up and then deftly switch between several highly entertaining, high-octane scenarios at a time, very rarely exposing players to a boring scene or dud act across ten hours, really is a wonder to behold. Sure, there’s the odd joke that doesn’t hit its mark, but more often than not what’s dished out is top-notch stuff; even the robots are good this time around, with the magnificent Loader Bot all but erasing the irritating memory of the godawful “comedy” tin can, Claptrap.

In terms of performance on Switch, as expected for a game of this style and vintage, Tales from the Borderlands is a smooth ride in both docked and handheld modes. Only the loading screens that punctuate the story here and there occasionally give rise to a slight wobble or hiccup as they ready the next chunk of action. This is still a really good looking game, too, with that unique Borderlands graphical style retaining its swagger some seven years down the line from the game’s original release.

If you’ve yet to indulge in Tales from the Borderlands this one feels like a total no-brainer; arguably Telltale Games’ finest hour, it’s a rip-roaring ten-hour adventure that immediately hooks you in and refuses to let you go until all is done and dusted, and is easily up there with the very best of its genre currently available on Nintendo Switch — or any other platform for that matter. In summation, what we’re trying to say, bro, is like…it’s totally bro, bro.

Tales from the Borderlands is arguably Telltale Games’ finest hour and easily one of the very best choice-driven narrative adventures available on any system. This is ten glorious hours’ worth of top-notch entertainment with a world-class cast, consistently excellent writing that manages to perfectly balance comedy and drama, non-stop twisted action and a cast of kooky characters that are a joy to spend time with. This really is the best the Borderlands universe has ever been, and a game that everyone should experience at least once. 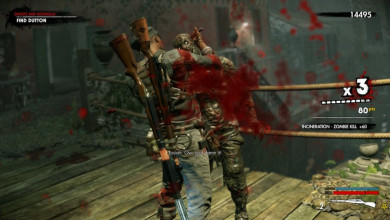 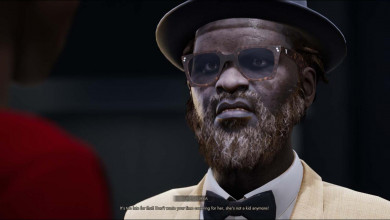 Review: FEZ – A Mind And World-Bending Puzzle Platformer That Deserves A Second Look 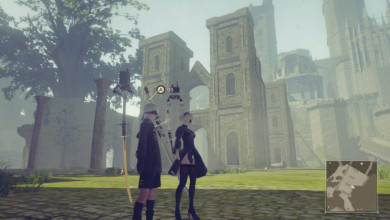 Review: NieR:Automata The End of YoRHa Edition – A Modern Classic Shines On Switch