It’s said that imitation is the sincerest form of flattery, and if that is indeed the case, then Airoheart is one of the most sycophantic releases on the Switch today. There’s certainly no shortage of ‘Zelda-likes’ available on the console, but this is a game that stretches the term “inspired by” to its absolute limits, as it finds as many ways as possible to be The Legend of Zelda: A Link to the Past without actually tempting Nintendo into releasing its famed copyright ninjas for damage control. Consequently, fans of that top-down Zelda style will no doubt find much to love here, as Airoheart does an adequate job of presenting a wide linear action-adventure experience, but it more often than not feels like you’re looking at a funhouse mirror reflection rather than the real deal.

Airoheart is set in the fantasy land of Engard and follows the tale of two feuding groups: the Elmer and the Breton. The Elmer are masters of peaceful forms of magic while the Breton are proficient in more offensive and violent magical abilities, and there’s been tension between the two groups for as long as anyone can remember. Your character, a half-Breton named Airoheart who lives among the Elmer with his grandpa, is brothers with a Breton leader who is instigating increasingly more aggressive maneuvers against the Elmer in what appears to be a prelude to war. He seems to be most interested, however, in retrieving the fragments of the mythical Draoidhe Stone, a magical MacGuffin that will all but guarantee a swift Breton victory. Guided by a mysterious disembodied voice, Airoheart thus sets out on a quest to retrieve the fragments before the Breton can get their hands on them. 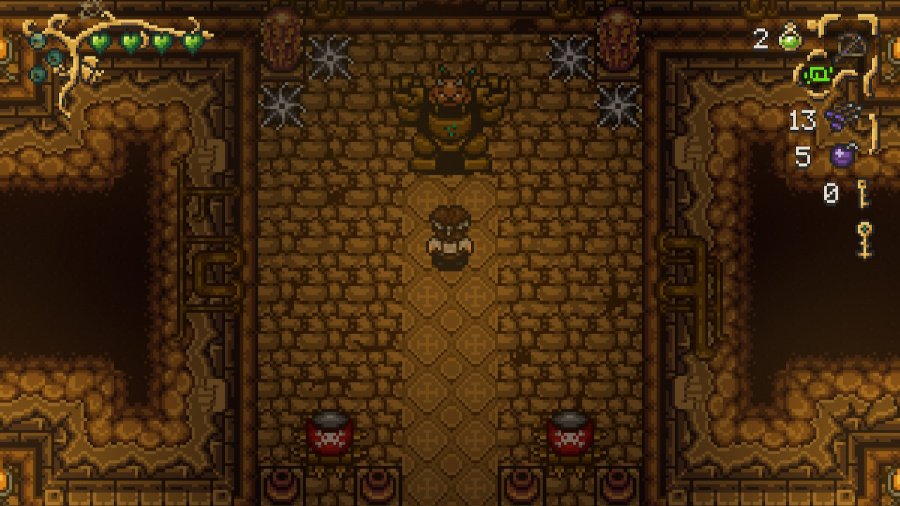 It’s not a terribly involving story, but it does take things in a deeper, darker direction than the typical ‘save the princess’ narrative. The eponymous hero is supported on his quest by a diverse cast of characters on both sides who help to add some color to the slower bits between dungeons, and though we didn’t find this storyline to be particularly memorable, we can appreciate the effort that went into giving the land of Engard a more nuanced social system that adds more texture to your dungeoneering.

Gameplay in Airoheart takes heavily after A Link to the Past, following the same basic gameplay loop of traveling between dungeons, collecting new items and abilities, and exploring an overworld packed with secrets to uncover. The main gameplay innovation here is the inclusion of Runes, which are selectable spells you can cast using mana that’ll create effects like a light heal or a moveable block to help solve puzzles. Practically speaking, Runes are just a different name for another set of items at your disposal, but their uses are distinct enough to feel like their differentiation from the standard item pool is warranted.

When you’re not in dungeons, you’ll likely busy yourself with testing out any new toys to unlock new pathways and caves to explore, or spend some time buying or trying on new gear that lightly mixes up your stats. We didn’t feel that the gear and stat system here was enough to qualify Airoheart as an RPG, but the little buffs to, say, the damage of your crossbow bolts does make a difference every now and then. The overworld feels sufficiently dense with worthwhile objectives, too. This isn’t the kind of game with a whole lot of nothing between points of interest to give you a sense of scope; every grotto and cave usually has something meaningful to check out and you can’t go more than a few steps in any direction without finding something else interesting.

Though you’ll spend much of your time exploring the overworld, dungeons are the main draw of the experience here, and each one contains a potent thematic mix of appropriately challenging puzzles and enemy encounters that are satisfying to overcome. That said, the lack of a localized map to help you navigate feels like an unnecessary handicap. Checking the map will only tell you where you are in the overworld, which is about as helpful as asking someone where the bathroom is and having them tell you the city you’re currently in. Dungeon design is streamlined enough that you don’t waste too much time trying to find the right path, and the challenges you face along the way are decently fun, but it’s things like a nonexistent dungeon map that tend to take the wind out of Airoheart’s sails. It has potential, and with a few changes it could be great, but it instead settles with being merely good.

And that’s the problem with Airoheart; it’s fine, but just feels like a less polished copy of a much better game. There’s nothing wrong with taking after the formula of a well-regarded classic, but simply repackaging the ideas of one with only the subtlest of tweaks here and there doesn’t makes for a must-play experience. Even when Nintendo itself returned to the well with A Link Between Worlds, it took care to include big gameplay innovations, with a more flexible approach to the item system along with quality of life changes like a refilling magic bar. Airoheart simply feeds on your desire to play more of a 30-year-old game you already own and can easily access on Switch, while adding no significant new ideas of its own. It’s the game version of the member of your group project who throws their name on the slideshow without contributing anything of substance to the content. 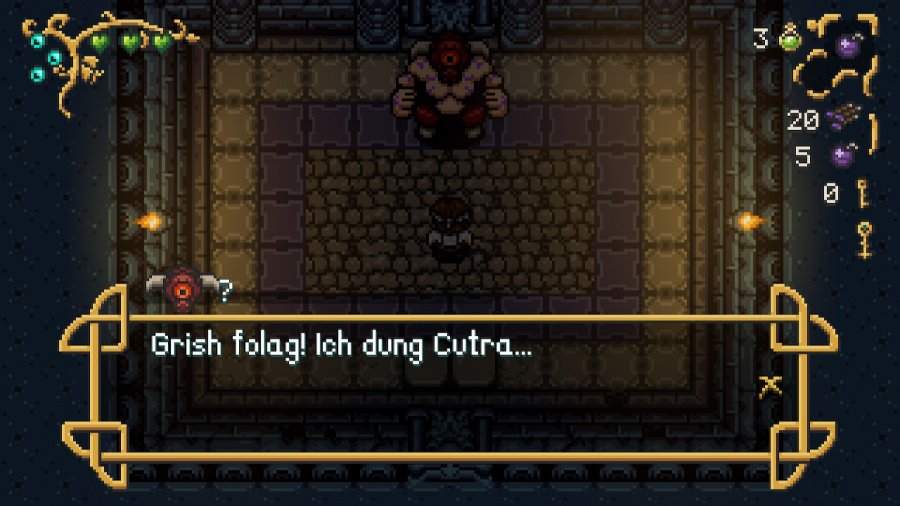 Airoheart doesn’t mess up any of the broad strokes of its game design, but a lack of attention to the smaller details accumulate to make it less satisfying overall. For example, there is a simply baffling overuse of an extremely loud and sudden gunshot sound effect that often feels out of place. When bombs go off, it feels like a fitting noise, but it’s much more obnoxious every time you get hit, fire a crossbow, close a door, roll over a pit (!?), open a chest, or breathe. You get used to it with time, but it’s such an annoying and frankly weird presence throughout that it actually drags down the whole game to a degree. Little things like this aren’t outright damning on their own, but there are many of them and their presence is like a fly in your soup; easily removed, but bothersome and unpleasant if they’re left in.

We experienced some bugs and glitches, too, some of which were kind of funny, most of which are a nuisance. For example, after dying to the final boss of a dungeon, we had a couple times where we respawned at the beginning of the dungeon with zero health, which meant that Airoheart just keeled over again right there. We also observed many instances where traps shooting out timed projectile attacks would glitch and some of the projectiles would get hung up on the trap’s hitbox. The worst of them was the game outright crashing back to the Home Screen, necessitating a full reboot and having to retrace our steps to make up for any lost data. Hopefully some patches will come, but in its current state, you’ll almost certainly be running into some kind of glitch or technical hiccup that will impede your journey. 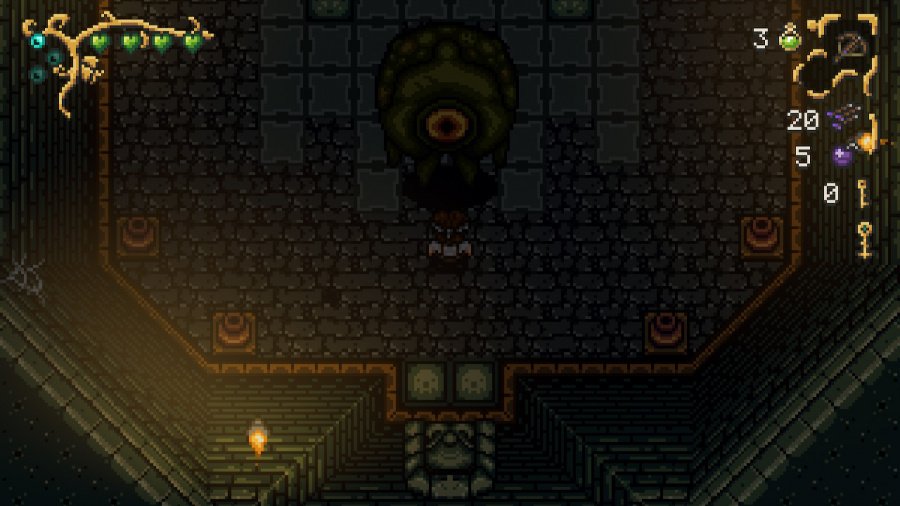 As for its presentation, Airoheart isn’t shy about lifting the visual style of A Link to the Past wholesale. Everything from the color palettes to the character spritework to the shape of the rocks you can pick up to toss at enemies could almost be mistaken for direct asset rips. Things get a little more creative here or there, but we would’ve liked to have seen greater effort to differentiate Airoheart and give it more of its own identity. Nothing looks bad, but sometimes that lack of originality gives you the sense you’re playing a ROM hack.

The music, meanwhile, is far less memorable, consisting of a series of generic and repetitive 16-bit chiptunes that are just kind of there. At the very least, this soundtrack doesn’t get in the way of one’s enjoyment of the gameplay, but it feels like there was a missed opportunity here to integrate audio that could elevate and help shape the overall experience to a greater degree.

Airoheart is a passable game, but hardly one we would recommend you rush out to buy unless you simply cannot get enough of the 2D Zelda formula. It follows A Link to the Past’s template so closely that it could never be classed as ‘bad’, but in a crowded market of homages, tributes, and variations on the theme, it does very little to stand out. We would suggest you pick this up only after you’ve played through A Link to the Past, the Link’s Awakening remake, and both the Blossom Tales games, and you still don’t feel you’ve gotten enough of that specific brand of top-down gameplay. Airoheart provides an adequate adventure, and for $40 at the time of writing, we simply expect more. 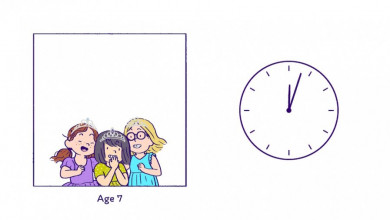 Mini Review: Florence – The Very Definition Of ‘Short But Sweet’ 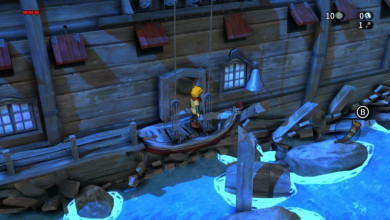 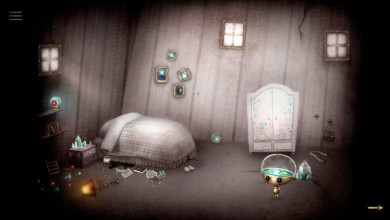